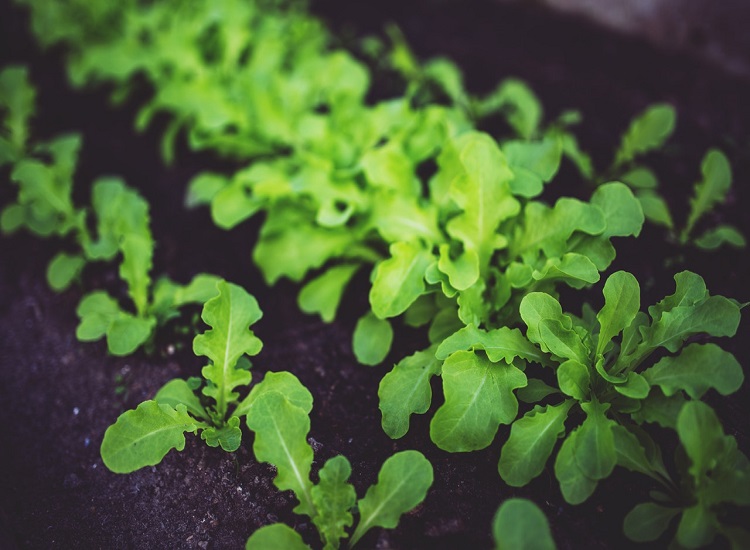 This year’s FoodWeb garden is in – for the most part. We have been eating some of the greens already so I am rotating new crops to make up the loss. The photo of the tomato plant you see above was taken about 5 June 2002. It’s now easily twice as large and laden with fruit, two of which made it into a goat cheese, roasted red pepper, and tomato sandwich on focaccia.

Let anyone tell me small scale – no, miniature scale – gardening is futile and I’ll show them not only pictures, but frozen tomato sauce, pesto, and a few rows of onions, garlic, and shallots enough to have a summer of great home-made dinners with some stuff leftover for winter. For good measure, I’ll toss in a few containers of bib lettuce, red leaf lettuce, celery, herbs aplenty, and a few special mints to boot. And I’m not even trying. Oh, and it’s all organic, all-natural.

Tomatoes are the big crop this year. Since we ran out of tomato puree for sauce in late December I thought it a good idea to load up on the buggers. Between the terra cotta containers and the twelve square feet or so of ex-lawn I’ve got nineteen plants. Some cherry tomatoes for salads will start us off, following up with some Early Girls. A few Roma tomatoes will kick in for roasting just as the Big Boys start to ripen for sandwiches with slabs of fresh mozzarella, and basil. Yup. It won’t be long until we are livin’ large.

Last years pepper crop was a disappointment so I decided to plant fewer peppers. Last year I planted the equivalent of a squirrel restaurant – Chez Rocket J. Almost every pepper I picked would have the bottom missing. The neighbor across the street came over one day after seeing me with a puzzled look and explained how the squirrels sat under the plants munching away. This also explained the several tomatoes I found with no insides. I have a killer recipe called “Italian Roast Peppers.” I’m not sure if it’s Italian, but it’s certainly delicious. So good it’s worth risking squirrel attacks.

The basil crop was knocked silly by the unseasonably cold weather we had two weeks ago. I ended up buying new plants, yanking the frostbitten ones from the pots and replanting them elsewhere. If there’s one thing I hate it’s tossing plants when there may be hope left. If all the basil makes it we’ll be in pesto heaven. Pesto tossed pasta offers one of the best and fastest dinners you can ask for. Whip up a salad with some vinaigrette and in twenty minutes you’re knockin’ off the rest remains of the Chianti and mopping out the bowls.

Herbs provide some of the best opportunities to enhance the flavor of food. Face it, even if you don’t cook with the herbs you grow nothing does the soul better than brushing your hand up a stalk of rosemary and taking a deep whiff. I saw an article on herbs and the author suggested planting various herbs in a strawberry planter. The next day I had a nine-hole planter stuffed with rosemary, oregano, thyme, marjoram, and lavender. A pot of sage and a curry plant (helichrysum angustifolium) stand guard. Two rectangular clay pots of parsley and chives mark the entrance of the brick walkway. The curry plant is great. It looks remarkably like rosemary. Brush the stalk though and the smell is undeniably curry. I’ve got a bag of Jasmine rice begging for a sprig of this stuff.

The mint grew incredibly large last year. And I mean incredibly. What started as one six-inch pot last year has turned into four six-inch pots. I gave a few away last year and the two pots I kept now badly need dividing. And that’s just the peppermint. There is also lemon mint and spearmint with the same problem. Speaking of problems, I don’t know what came over me this year but I just had to have more varieties of mint. At the farmer’s market, I found a vendor with mints! That afternoon I added apple, pineapple, orange, chocolate, Vietnamese, and lime mints to the collection. It’s a regular botanical garden out there. It’s a good thing we love mint ice cream and mint tea.

So, you may be thinking with such a small garden what else could he have planted. Oh, ye of little faith. Back in October, the local farm supply store was selling short on seed garlic. Yours truly came home with a few heads, stuck them in the dirt and eagerly awaited spring. About February I started watching the garden closely and was rewarded with tiny sprouts sticking up through the cold ground in March. I’m hooked. It’s off to the farm supply again for some onion and shallots. What was once pepper plants is now allium alley. In a few weeks, I’ll be using fresh organic garlic in my recipes. In the late summer, it will be onions and shallots.

If you get move on you may still be able to start your own garden. Even if it’s just a few clay pots of herbs to sniff. That’ll be enough to spur you on to remove a bit of lawn next year for some tomatoes. Trust me, you’ll have a new appreciation for life and this wonderful place we call earth and all that lives upon it when Mother Nature does her stuff next year.